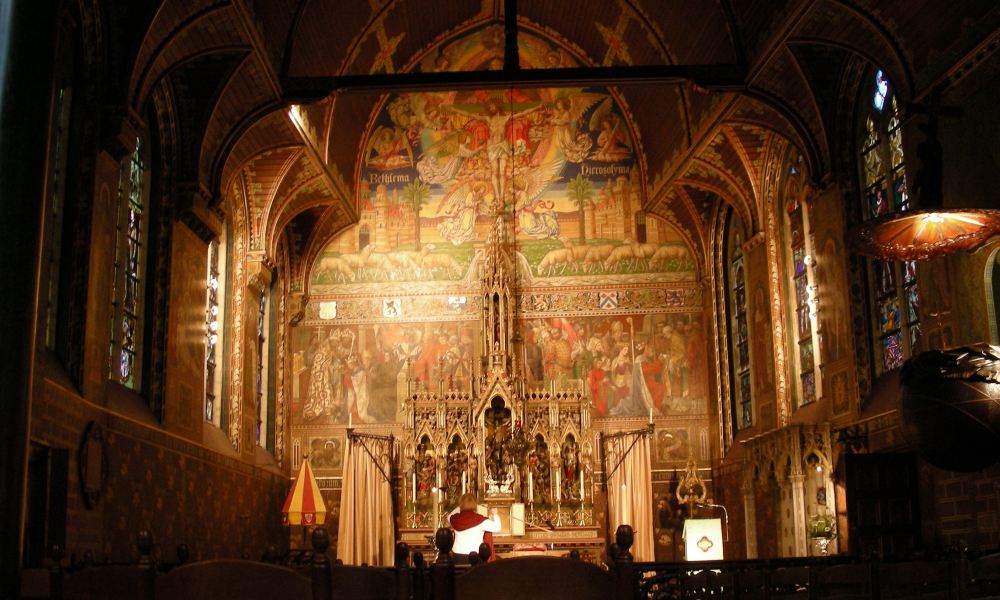 Bruges is a stunning city, full of history, full of intrigue, and full of beauty.

The architecture in Bruges spans the centuries, dating back at its oldest to medieval times. The different buildings and styles chart the changes in design over the years, and it tells its own story; here are some of the best of the best.

This is Bruge’s oldest parish church, having been built between the 12th and 15th centuries. But calling is a parish church belies the beauty of the place. However, it was never actually intended to be a cathedral, and only received that status in the 19th century, so Sint Salvatore really was a ‘parish church’ for many centuries!

In 1839 a fire destroyed the entire roof of the cathedral, so William Chantrell (a famous English architect who was well known for his neo-Gothis church restorations) was drafted in to help. As well as repairing the roof, Chantrell was also asked to build a high tower so that the cathedral became the tallest in Bruges. Chantrell moved away from the Gothic when it came to the design of the tower, instead choosing a more Romanesque design which came in for much criticism once the project was completed. Today, however, the design is feted across the world as beautiful.

The Basilica of the Holy Blood

It was Derrick, Count of Alsace, who wanted this impressive basilica to be built in the early 12th century. The church consists of both upper and lower chapels, and is built in the Romanesque style (a style characterised by rounded arches), although the chapel itself was re-imagined in the 16th century in a Gothic style.

It is the interior staircase that is often the most talked about architectural feature of the Basilica of the Holy Blood. Known as De Steegheere, it leads to the upper chapel and was built between 1529 and 1533 in both Gothic and Renaissance styles. Lancelot Blondeel, a Flemish architect, designed the staircase so that the outside of it was decorated in ornate statues.

Church of Our Lady

Amongst the many architectural features that make this church stand out, the main tower has to be the most famous. At 122.3 metres high, it is the tallest structure in Bruges, and the second tallest brickwork tower in the world, beaten only by St Martin’s Church in Landshut, Germany.

Once inside, there is plenty to see, including the bronze effigies of Charles the Bold and his daughter Mary and Michelangelo’s 1504 sculpture of the Madonna and Child (which has been stolen and recovered twice!).

This Gothic town hall was built is 1376, and is just as stunning today as it was back then. With six Gothic style windows across the front façade, as well as 48 niches for statues, there is plenty to celebrate. The original statues that stood here were destroyed during the French Revolution, and as time goes on each set of statues is replaced for something more in keeping with the time. What never changes, though, is the majesty of this town hall, which was the first of its kind in the Low Countries.

This fantastic concert hall is a modern building compared to the rest of Bruges, but strangely does not look out of place amidst the Gothic architecture surrounding it. Architects Paul Robbrecht and Hilde Daem submitted their design to a 2002 competition to find the designers for the next big building project in Bruges. They won, and work started immediately.

Their design was chosen partly because of its functionality (easy to find, easy for the public to use, and great for live events to be performed in) and partly because of its genuine beauty. With bright red tiles that attract your attention from whichever direction you see it, but with a different shape and appeal from every angle, this is something different and special.

Want to know who offers 2 for 1 mini cruises and when? Get my FREE guide. Just pop your details in the boxes below and I'll send it to you. I'll also send you occasional email updates and any good mini cruise deals worth recommending. I won’t spam you nor pass your details onto third parties, and you can unsubscribe at any time.
Posted on Friday 2nd January 2015Thursday 12th May 2016 by David
(Photo credit to Kristina D.C. Hoeppner)