Travel to Denmark and explore the picture-perfect scenes Scandinavia boasts in abundance. 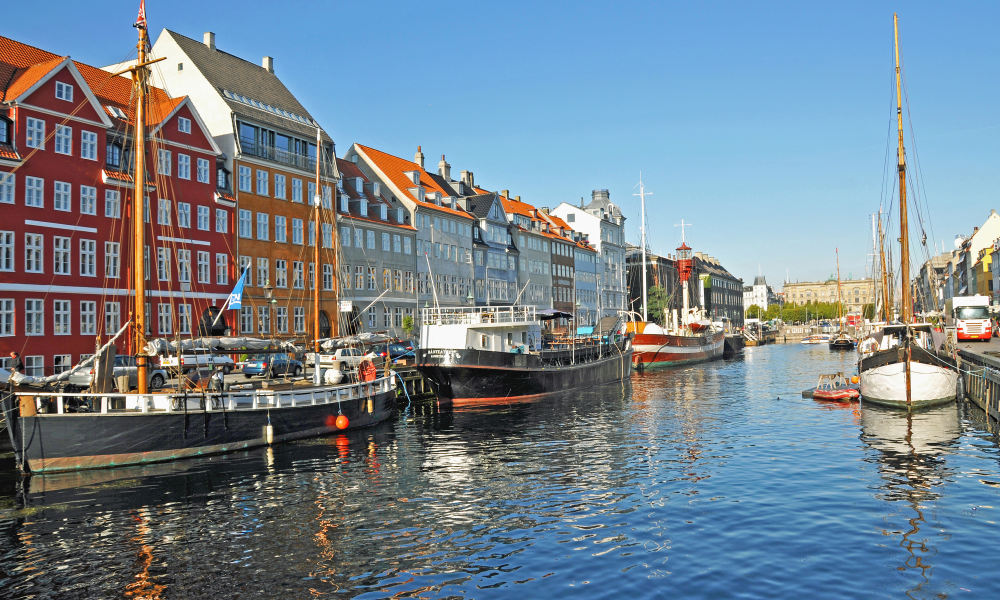 Denmark is a Nordic country found in Northern Europe, located to the south west of Sweden, to the south of Norway and to the north of Germany.

It's a beautiful country famed for great food and a rich maritime heritage. Copenhagen is arguably the top attraction for tourists to Denmark but for reasons most likely to due to economics there isn't a great deal of choice when it comes to ferry services here.

The following guides explain how to get from the UK to Denmark by ferry (or cruise ship) from different parts of the UK.

Harwich to Esbjerg by Ferry

Route closure: On 30th April 2014 DFDS Seaways announced the closure of the Harwich to Esbjerg route which was effective as of the 29th September 2014. The line blamed strict sulphur emission limits in a new environmental law for adding an estimated £2million of annual costs to the operation of this route. The route first started back in 1875 and is closing after 139 years of operation. It is unknown as to whether the route will ever be reinstated though I expect it most likely will not as this route was suffering from dwindling passenger numbers and it is highly likely that freight will be moved elsewhere in the network or through other operators.

Sailing to Esbjerg from Harwich is simple and efficient.The route moves a lot of freight cargo but is also highly popular with car, caravan and camper van drivers who want to explore the magnificent Danish country. With excellent road links, great cities to explore such as Copenhagen and world-class attractions such as the original LEGOLAND Billund, there is plenty to see and do here. Whilst the ferry crossing is fairly lengthy, it is an overnight service which means you are asleep during most of the sailing. For the part you are awake there's plenty to do on the friendly, cosy yet comfortable Sirena Seaways.

Getting to Harwich International Port

Getting to Harwich International Port is very easy, as it is located on the Essex coast with great road and rail connections.

Checking-In And Boarding Your Ferry as a Foot Passenger

You will need to take along passports for everyone travelling in your party. You can find more information on who needs passports and to apply for them on Gov.UK.

Check-in takes place in the main passenger terminal building adjacent to the railway station. The DFDS Seaways office is tucked off to the left hand side in a small office. The Stena Line check-in desks draw the focus here so this tiny office looks a bit lonely in comparison. There's a quiet departure lounge a bit further beyond the office and whilst it does benefit from being secluded it suffers from a lack of announcements so you'll need to keep your eye on the time so you're ready to board.

The terminal has a small café for light refreshments which can be found opposite the Stena Line check-in desks.

Once boarding commences a short queue normally forms. Passports and boarding tickets are checked before you head through a security check area. A random spot check system is usually in place meaning security staff will pick a random selection of bags to check.

Once you are through this area you then proceed onwards through a walkway that takes you directly onto your ship, the Sirena Seaways.

Checking-In And Boarding Your Ferry with your Car, Caravan, Camper Van or Motorbike

Once you've reached the port follow the signs for taking your car (or vehicle) on the ferry. This detours you to a separate part of the port to foot passengers who will use the main terminal building next to the train station.

You will find several kiosks. Here you will check-in where your passports, your booking confirmation and your vehicle details will be checked. From here you'll drive around to your allocated lane to park in. Here you will wait until called forward by staff. You will drive along a gradually elevating ramp before descending around a loop that then leads to a ramp to board the vessel. The ships' staff will direct you to the next available parking space on-board and will make sure you have parked in the correct position.

Remember: The vehicle bay is closed off the passengers during the voyage so make sure you take out everything you need for the journey and move it to your cabin for storage. Also, remember to lock your vehicle but DO NOT activate the alarm.

Despite the numerous public-address announcements that are made before departure you can always guarantee someone won't have listened. The motion of the vessel moving off the port (a gentle shudder) is enough to set off many car alarms. The result is further public-address announcements calling the owners of the vehicles to deactivate the alarm. The morale of the story is DO NOT activate the alarm to avoid unnecessary disruption to your sailing.

The Sirena Seaways is a cosy vessel, built to carry a large volume of cargo. Whilst the passenger decks are relatively small compared to King Seaways or Princess Seaways, there's still plenty to do on-board and the service from the tight-knit crew is very personable. This ship sails alone on the Harwich to Esbjerg route and so there isn't a daily service but one service every two, three or four days instead depending upon the season.

Arrival into Esbjerg is at 1300hrs. The port is well placed to the south of Denmark affording it great connections for onward road journeys to Germany, northern Denmark or further afield to Scandinavia. Sweden, for example, is just a short road journey beyond Copenhagen.

You really can't visit Denmark and not visit LEGOLAND Billund (I'm a big kid at heart). This theme park is just 40 miles (about 64 kilometres) by road from the port and is great for kids of all ages.

Tip: Catch the modern cruise ferry from Copenhagen to Oslo ° to explore Norway.

Speaking from experience it is possible to walk from the port to the centre of Esbjerg. There are public service buses that run across Esbjerg should you rather not walk. There's a handful of attractions in the city and it is a great choice for a short break. Esbjerg has a very strong maritime history and so you will find nautical themed museums and attractions.

Fanø is an island in Denmark that is right across the water from the port of Esbjerg and is a popular attraction for wildlife buffs and photography enthusiasts in the Autumn as the birds migrate.

Your Return Ferry From  Esbjerg to Harwich

Arrival into Harwich is at 1300hrs the following day.

Distances from the ports

From Esbjerg (for tourists from the UK):

From Harwich (for tourists from Denmark):

UK to Denmark via The Netherlands

You can reach Denmark by road if you first sail to the Netherlands. I've covered this in a separate guide.

I've calculated some distances which might be of use should you fancy a holiday to Scandinavia from the UK:

UK to Denmark via France

You can reach Denmark by road if you first sail across the channel to Calais or Dunkirk and drive up through France, Belgium, The Netherlands and Germany.

I've calculated some distances which might be of use should you fancy a holiday to Scandinavia from the UK:

UK to Denmark by Coach (and Ferry)

The London to Aalborg takes in a few more stops. It too runs from London Victoria Coach Station via Dover to Amsterdam through France and Belgium. Here you change service and continue onwards to Hamburg in Germany where you will change onto yet another coach. From here you'll travel onwards into Denmark calling at Kolding, Vejle and Aarhus before finally arriving at the Eurolines Coach Station in Aalborg.

Confused? Unsure? Got questions? If I can help I will! I've sailed on ferry mini cruises and taster cruise ship holidays so I know what to expect on such holidays. Get in touch and I will try my best to help you out.
Posted on Wednesday 18th June 2014Friday 18th September 2020 by David
(Photo credit to Dennis Jarvis)